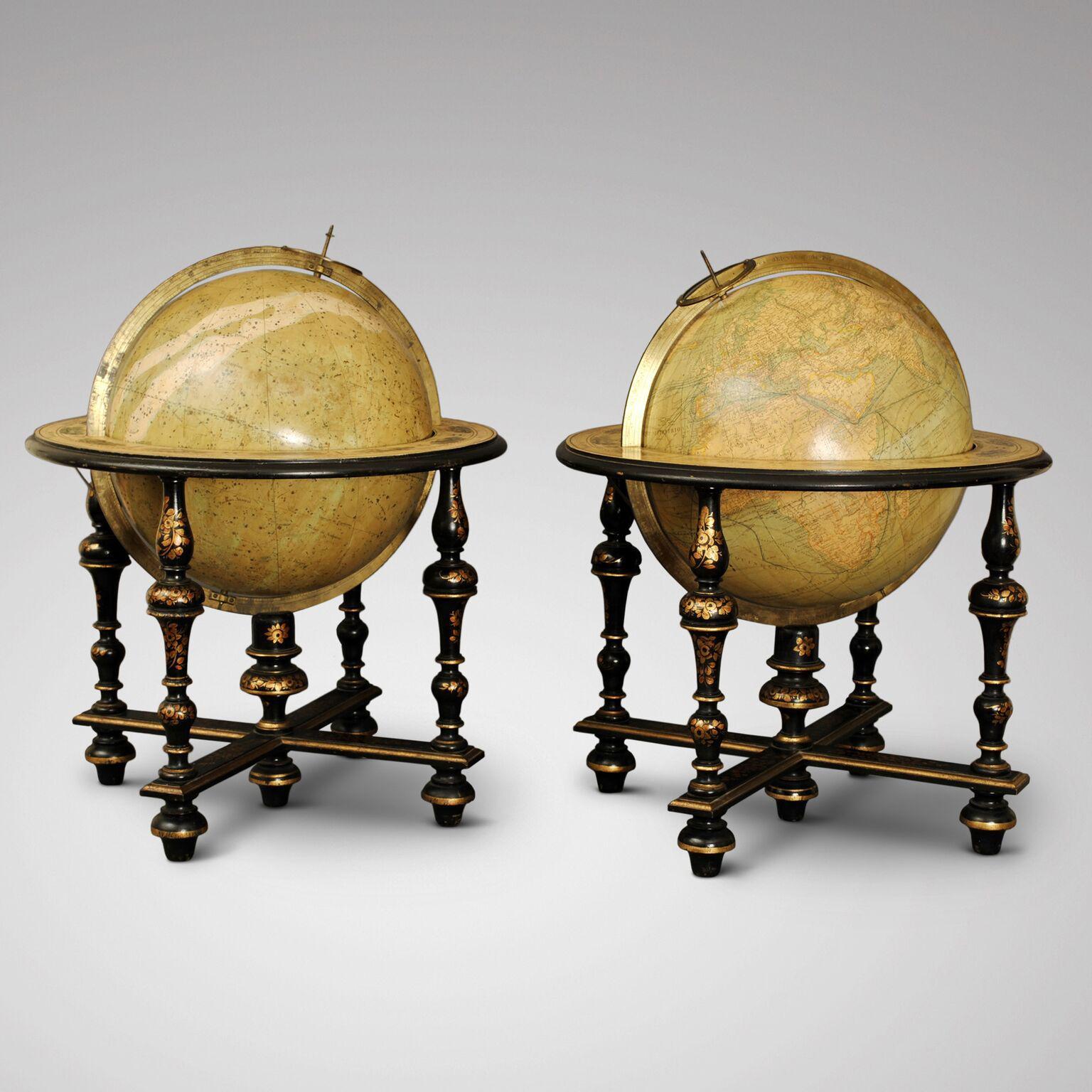 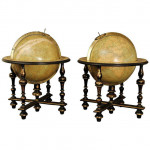 Add to Wishlist
Add to Compare

The terrestrial GLOBE TERRESTRE PAR DELAMARCHE E. BERTAUX EDITEUR 25, RUE Serpente PARIS. made up of twelve chromolithographed gores and two polar calottes on a hollow plaster-covered sphere, the equatorial graduated in individual degrees and labelled every 10¬∝ and in hours I-XII (x2), the meridian of Paris graduated in individual degrees and labelled every 10¬∝, the ecliptic graduated in individual days of the houses of the Zodiac with sigils and labelled every ten days, the oceans showing ocean currents, the tracks of D'Urville, Ross and the Astrolabe with dates, submarine telegraph cables and steamship routes with ports of arrival and departure and journey time in days, Antarctica with projected coastline and Enderby Land and Graham Land shown as islands, the continents delicately shaded in outline in pink, green, orange and yellow, with some nation states similarly outlined, showing mountains, rivers, towns and cities, China showing the Grande Muraille, Africa with details such as the river Congo ou Livingstone, Zone d'Influence Fran√ßaise in north-western Africa and the ETAT DU CONGO, North America with native territories such as those of Dacotas ou Sioux, Inds Knistineaux and Eskimaux, Greenland with projected northern coastline.

The celestial DELAMARCHE, Rue Serpents, 25 PARIS made up of twelve pale green chromolithographed gores and two polar calottes laid to the celestial poles on a hollow plaster-covered sphere, the axis through the celestial poles, the equatorial graduated in individual degrees and labelled every 10¬∝, and in hours I-XXIV, the colures labelled but not graduated, the ecliptic graduated in individual days of the houses of the Zodiac with sigils and labelled every ten days, a table showing the stars to six degrees of magnitude with a symbol for nebulae, the constellations depicted by mythical beasts and figures and scientific instruments in faint dotted outline, the stars labelled with Greek characters and some named in French, the Milky Way depicted in yellow with a strong hand-drawn orange border; both spheres with a stamped brass meridian circle divided in four quadrants, on a tall and elegant mahogany table stand/short library stand, the printed horizon graduated in degrees of amplitude and azimuth with compass directions, days of the month with an equation of time, and days of the houses of the Zodiac with a star chart for the sun's apparent path along the ecliptic and stars to various orders of magnitude.

Thank you for your enquiry.

We will get back to you soon.

A fine example of a Jones most improved microscope by Dolland

A Butterfield sundial in original case

A pair of 19th century table globes by Crunchley

A cased pair of max and minimum temperature thermometers